19Then the same day [on which Jesus had risen from the dead] at evening, being the first day of the week, when the doors were shut where the disciples were assembled for fear of the Jews, came Jesus and stood in the midst, and saith unto them, Peace be unto you.

20And when he had so said, he shewed unto them his hands and his side. Then were the disciples glad, when they saw the Lord.

21Then said Jesus to them again, Peace be unto you: as my Father hath sent me, even so send I you…

24But Thomas, one of the twelve, called Didymus, was not with them when Jesus came.

26And after eight days again his disciples were within, and Thomas with them: then came Jesus, the doors being shut, and stood in the midst, and said, Peace be unto you.

27Then saith he to Thomas, Reach hither thy finger, and behold my hands; and reach hither thy hand, and thrust it into my side: and be not faithless, but believing.

28And Thomas answered and said unto him, My Lord and my God.

29Jesus saith unto him, Thomas, because thou hast seen me, thou hast believed: blessed are they that have not seen, and yet have believed. 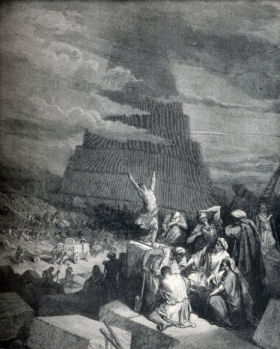 People who deny the Trinity firmly believe that when Thomas called Jesus "my Lord and my God" in the passage above he could not have meant what Trinitarians say he meant, which is that Thomas believed Jesus, a human person physically standing in front of him and obviously distinct from the Almighty Father in heaven, was nevertheless somehow one with the Father and the Holy Spirit in the identity of the one true God of Israel.

The modern "Unitarian" groups I've encountered so far who deny this, and who have tried to tell me Thomas' words must have a different interpretation than the Trinitarian one, are the following:

1) The liberal Unitarian Church. They say the person who wrote that passage, whoever he was, might have believed something like the Trinitarians say (i.e., that while Jesus was a person distinct from the Father he was also somehow truly God), but the Bible was the product of a more primitive time, which wasn't, by the way, quite as early as the time of the apostles for the most part. Slightly later Christian communities patched together their scriptures according to various, sometimes conflicting oral traditions and fragmentary writings concerning the life and teaching of Jesus they received from whatever person founded their group, who may or may not have been an actual apostle of Jesus, who may or may not have actually risen from the dead, or ever existed at all, for that matter. So they say yes, the passage is constructed to read as if Thomas believed Jesus himself was really God—but because that is only one thread of teaching in the early church, because that is contrary to logic and modern scientific knowledge, and because our modern knowledge of the way the Bible was written and then redacted many times lets us conclude it's not really the inspired, inerrant, and authoritative Word of God anyway, go ahead and disregard John 20:28 in favor of other threads of teaching in the New Testament you find to be more true about Jesus. At this point, they say, we can't know with certainty what Jesus or the apostles themselves really taught about God and Jesus in the first century. What matters is the meaning the Holy Spirit gives you as you read the Bible for yourself today in the twenty-first century.

2) The conservative United Pentecostal Church. To their credit, they believe that the Bible is the inspired, inerrant, and authoritative Word of God, and so they say that since it shows Thomas, a disciple who had sat under Jesus' teaching for three years, calling Jesus "my God," it does obviously mean to teach that Jesus himself is really true God. However, they also say Thomas couldn't have really meant Jesus was an eternal person distinct from the Father, because the Bible also says God is one. Therefore the Bible must mean Jesus himself is that one true God in a different mode or manifestation than that which he used earlier when He worked as the Father or that which He has taken on now, when He works as the Holy Spirit.

3) Don Barnett, the independent Bible teacher who founded Community Chapel, the church of which, sadly, I was a member for ten years. He correctly identified the UPC doctrine, in which he had been raised, as a lapse into a third-century heresy known as modalistic monarchianism, so he came up with his own version. Unfortunately, in so doing he stumbled into another third-century heresy, dynamic monarchianism. He said Jesus could be called God by Thomas because God dwelt within Jesus and was intimately united to him in a unique way; however, Jesus himself was only a man who didn't exist until his unique, supernatural conception by the Holy Spirit in Mary's womb. (Throughout his time as pastor of Community Chapel, Barnett consistently upheld a "dual nature" doctrine that taught Jesus, though truly a man, was also God due to his unique union with God and also because of his unique conception and birth, but sometime after the collapse of the Chapel, Barnett moved to the view of Jesus described in the next paragraph. He now leads a small group named "The Church of Agape" (COA) that is even more cult-like than Community Chapel was, where he apparently teaches that Jesus' union with the Father wasn't any different than our own and certainly did not make him God.)

4) Cultic groups like The Way International, offshoots of The Way like Spirit & Truth Fellowship International, and individual authors like Anthony Buzzard who say Thomas meant only to call Jesus "master," "one who is highly venerated," "an accredited representative of God," or something like that. They appeal to the one place in the Bible the word "god" is used (though in the plural) to refer to Old Testament rulers (Psalm 82:6, and also, in John 10:34, quoted once by Jesus) to support this claim. They also present numerous arguments based on similar word studies to "prove" other words used about Jesus' deity don't mean what nearly all other Christians since the first century have believed them to mean, because those words were in a few cases also used to mean something else either in the Bible or in secular literature.

5) The Jehovah's Witnesses. They say Thomas meant "god" (small 'g') meaning to recognize Jesus as a divine being who existed prior to his human birth but not as the one true God, since they believe Jesus is the incarnation of the archangel Michael, a created heavenly being inferior to the one true God.

6) The Mormons. I've never read specifically what they think Thomas meant in John 20:28, but since they believe the Father, the Son, and the Holy Spirit were all once separate humans from the planet Zodfrot (or some name like that—I can't remember the actual name) who eventually earned the right to be gods just as all good Mormons on this planet also hope to be after death, they would probably read that view of Jesus into his words, i.e., as being a completely separate god from the Father just like we all can be. However, probably they are not technically "Unitarians" since they would probably say they believe in a Trinity of some sort, but clearly they don't believe in the Christian Trinity. They, like the rest of the groups in this list, think the Trinity is, at best, merely an outmoded fourth-century theological construct that bears little if any relation to anything that God really is, or, at worst, a demonic subversion of the Christian church into mysticism or pagan mythology.

So that's six modern attempts to explain Thomas' words in John 20:28 by groups that would have me believe the doctrine of the Trinity is clearly false. There's probably more, but these are the ones I've personally encountered at one time or another. All these groups have told me the doctrine of the Trinity is impossible, that I am woefully mistaken in believing it to be true, living in dead religion as a result, and that they have the true teaching concerning God and Jesus instead. My question has to be that if the "Trinitarian interpretation" of this verse is so clearly wrong, why is there so much disagreement on what is true instead? So maybe I'll start taking them seriously when they get it down to just one version that has to be true instead of the Trinity. Until that happens, I think I'm going to be pretty comfortable in my belief that the doctrine of the Trinity, as found in the ecumenical creeds of the Church accepted by Roman Catholic, Eastern Orthodox, and historic Protestant churches alike, sums up very well what I've read in the Bible about the Father, the Son, and the Holy Spirit.